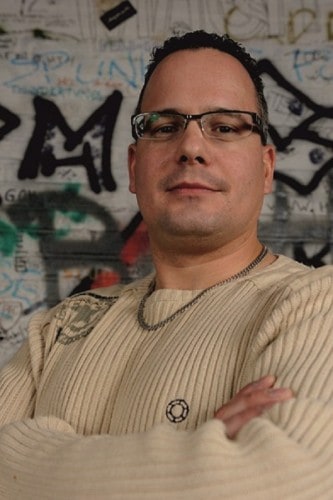 DJ Arvie (Rene Veldman) has earned a rock solid reputation amongst the Dutch electronic music community amassing an impressive history dating back to 1992 – when he began producing gabber and hardcore. After a number of years honing his craft, writing and releasing tracks on various independent labels, his style eventually evolved into House and Techno. He had the opportunity to work at the record label Ramshorn, where he co-produced the album Dance to Cybertrance 2. Filled with classic tracks from Josh Wink, Joey Beltram, X-Dream this album was destined to become a collector’s item!

Some of the highlights of his DJ career include winning a dj contest in the early nineties and playing the finals in the “Club in the Ring” of the Amsterdam Arena, gigging at the Roxy in Amsterdam with Dj Shaun, making the crowd go completely insane at Club Zoo and of course the old school vinyl dj sets at Nighttrain in Middelburg where the music powered through Progressive House into booming Techno. The parties all over the Netherlands are like a second home to him particularly “Ska” New Years Party 2011/2012 with over 2000 people in attendance.

These days Dj Arvie spins the wheels in a monthly one hour Techhouse/Techno mix on www.Cuebase-FM.de (Redstream). He currently fills the floor at several parties in Katwijk, though much of his time is spent focused in on his studio work. Proficient in multiple genres, his current original productions and remixes range from Progressive House to Techhouse and Techno. Check out Arvie on his own label Tainted Buddah Records or on other labels like Ramshorn, TRNC Records, 5th gear, Dance All Ways Digital and Junx records.